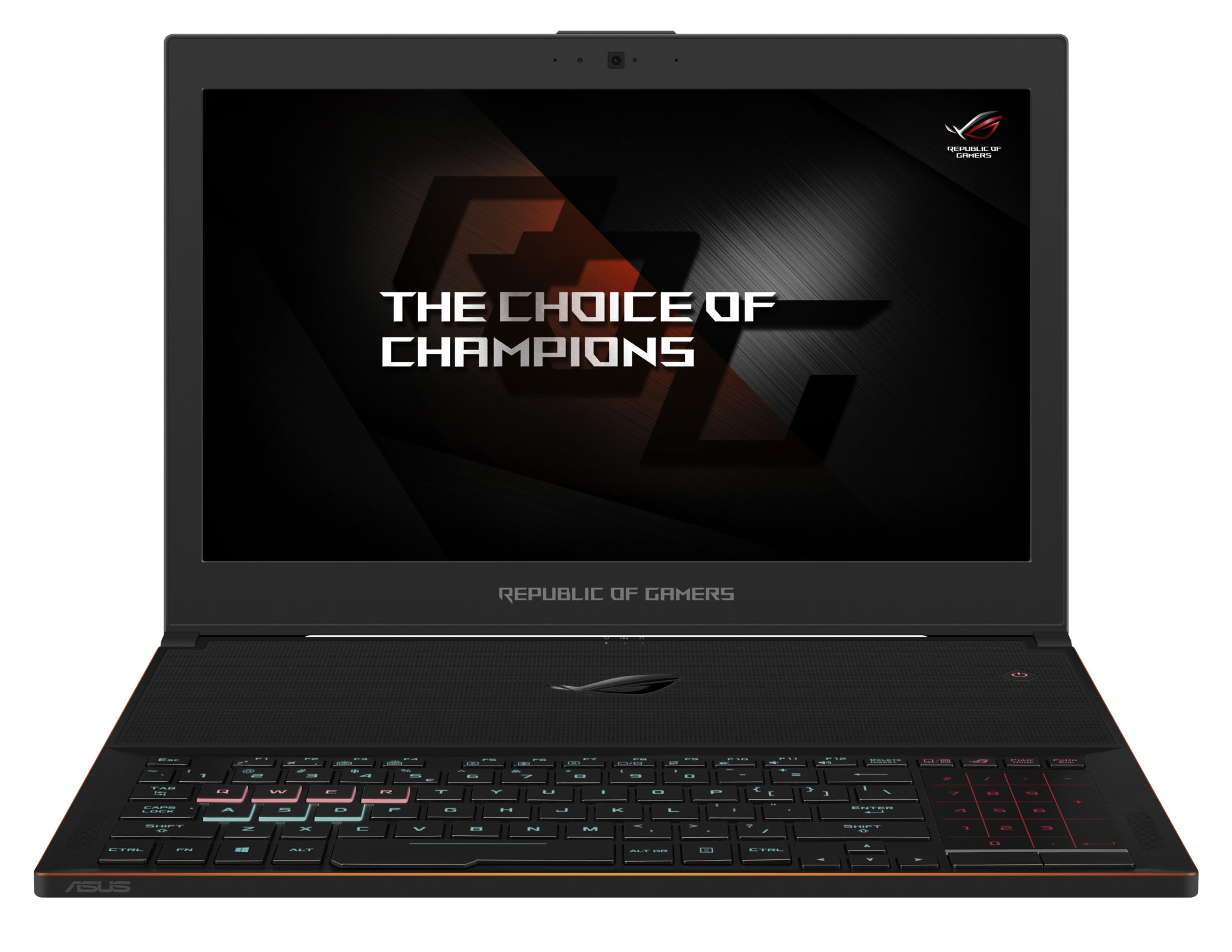 The World’s Slimmest Gaming Laptop with Unparalleled Performance and Features

The ROG Zephyrus GX501 is the result of persistent dedication to gaming innovation. ROG aims to create laptops that are slimmer, cooler, quieter and more powerful than ever before — to fully address the needs of today’s highly mobile gamers.

The ROG Zephyrus GX501 has a blade-inspired design, resulting in an ultra-slim and sleek profile that tapers from 17.9mm down to just 16.9mm at its thinnest point. Its compact dimension makes it the world’s thinnest gaming laptop powered by the latest Intel® Core™ i7 processor and NVIDIA® GeForce® GTX 1080 Max-Q graphics, delivering unstoppable gaming performance, making this combination a good competitor against larger gaming devices and desktops.

The ROG Zephyrus GX501 is cooled by an exclusive Active Aerodynamic System (AAS) that runs cooler and quieter without sacrificing performance. AAS incorporates unique AeroAccelerator (AA) technology that increases the speed and efficiency of airflow through the laptop. The fan’s 3D-curved surface cover and accelerator guides enhance airflow and remove heat away from the components more efficiently. When the ROG Zephyrus GX501 is opened, a portion of the bottom of the chassis flexes to increase the airflow volume by 20 percent and further increase air circulation. AAS maximises system stability as well as gaming and thermal performance, and it allows full utilisation of the Central Processing Unit (CPU) and Graphics Processing Unit (GPU), so gamers can engage in marathon sessions without fear of interruption. 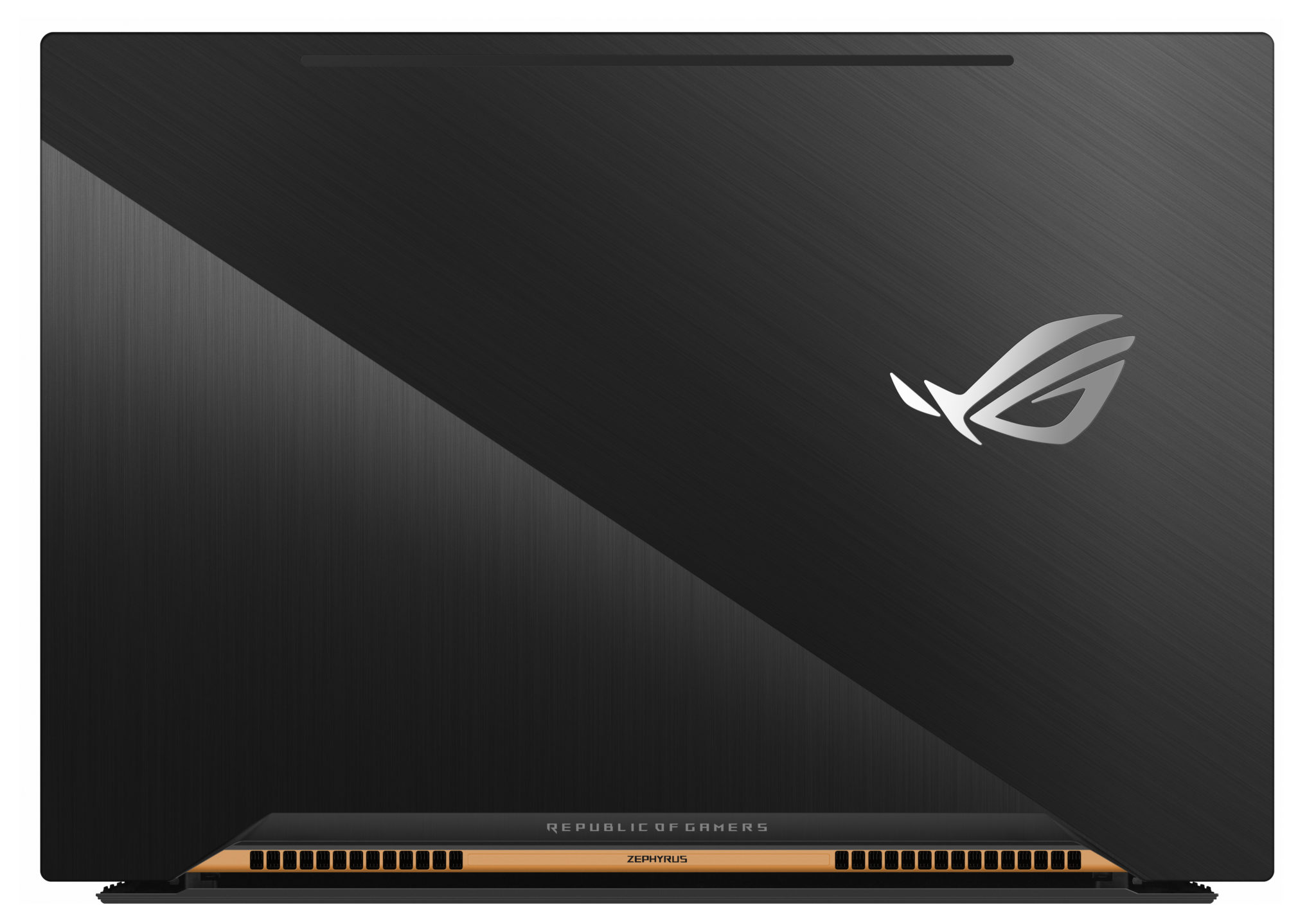 The ROG Zephyrus GX501 featuring the NVIDIA® GeForce® GTX 1080 with Max-Q Design further advances the efficiencies of Pascal resulting in a laptop that is both portable enough to take around the world and powerful enough to play the top games.

The ROG Zephyrus GX501 achieves such outstanding performance in a small form factor through innovative cooling methods and Max-Q design. Never before has such performance been available in such an ultra-thin package.

Max-Q is a term borrowed from aerospace engineering and is hugely important for the design of rockets launched into space. At liftoff, velocity of a rocket is 0, but air density is very high. As it gains altitude, velocity keeps increasing, but air density keeps decreasing. Max-Q is the balance point of velocity and air density when the aerodynamic stress on the rocket is at its maximum.

For the Space Shuttle, this typically occurs at an altitude of ~35,000 ft. (11 km) at around a minute into the launch. Space faring rockets are precision-engineered for Max-Q; the balanced point of velocity and air density for which it has been designed.

Similarly, in order to design the thinnest, quietest and fastest gaming laptops, they have to be precision-engineered to balance performance and power efficiency. Hence, NVIDIA® called this design approach the Max-Q design.

The ROG Zephyrus GX501 features a keyboard positioned at the front of the chassis — a design that allows better cooling of internal components, while providing a comfortable and familiar experience for gamers accustomed to desktop keyboards. ASUS Aura RGB lighting technology provides dynamic and customisable lighting effects over the entire keyboard, as well as separately highlighted customisable effects for the WASD and QWER key groups, allowing users to create a gaming ambience that matches the feel of their game. Anti-ghosting keys ensure commands are instantaneously and correctly interpreted — even when up to 30 keys are pressed simultaneously. The keys have been ergonomically designed to provide optimum comfort and typing accuracy. The ROG Zephyrus GX501 positions the touchpad to the right of the keyboard and also integrates a 10-key function that is easily activated by a hot key. When activated, a red backlight illuminates the 10-key functionality.

Since the launch of the Join the Republic campaign last year, ROG has been constantly engaging the local gaming communities through rewards programmes, gaming tournaments and exclusive collaboration with renowned brand. As part of the launch of the ROG Zephyrus GX501, ROG will be rolling out its all new ROG Accidental Damage Protection (ADP) Plan starting with the ROG Zephyrus GX501, and also an exclusive collaboration between ROG and Casio G-Shock.

Every ROG user deserves a priority service and support from the people who knows their devices best. So when customers purchase ROG laptops and desktops, they will enjoy an exclusive after-sales support from the ROG Experts on top of their minimum one-year international or on-site warranty respectively. This support includes a dedicated hotline for all ROG laptop and desktop users only, a priority queue at ASUS Singapore Service Centre along Tai Seng, and an Accidental Damage Protection (ADP) Plan[1] that protects the device from unforeseen accidents such as water spillage or cracked screens. For more information on the coverage under the ROG ADP Plan, speak to an ASUS Specialist at the ASUS Brand Stores or authorised retailers.

Being part of the republic is all about the exclusivity of what the ROG users can enjoy. In conjunction with the launch of the ROG Zephyrus GX501, ROG is honoured to announce the collaboration between ROG and Casio G-Shock – the world’s renowned watch maker of the ultimate tough watch. As part of this collaboration, ROG and G-Shock have designed and produced a limited edition G-Shock Watch – ROG Masters 2017 Edition, with only 500 pieces worldwide which will be given away with every purchase of the ROG Zephyrus GX501 for a limited time period.

“We are excited to work on this exclusive collaboration model to commemorate this significant milestone with ASUS.  CASIO G-SHOCK has created a legacy of shock-resistant watches and our commitment to quality is unwavering while ROG’s gaming features are unrivaled in many aspects.  We enjoyed the positive synergies of both brands and would like to congratulate ASUS who once again made an amazing breakthrough.” said Mr Johnny Ng, General Manager of Casio Singapore Pte Ltd (Timepiece Division)

“It is our pleasure to be able to work with Casio, and we are all excited about this collaboration. I believe this collaboration will bring us forward and assist in achieving what we set up to do, as we don’t just want to build a brand for ROG, but a community around this brand. As part of our continual effort to engage and reward the ROG community, I am also pleased to announce the launch of our Accidental Protection Plan, catered exclusively for our ROG supporters. ROG laptop and desktop users will not have to worry about their after-sales support any longer, because they will now receive priority service and personalised support from the people who knows their ROG devices best,” said Emma Ou, Country Manager of ASUS Singapore.

The ROG Zephyrus GX501 is now available at all ASUS Brand Stores and authorised retailers, retailing at $4,898. Starting from today, all ROG Zephyrus GX501 will come bundled with the ROG ADP Plan. In addition, from now till 10 December, receive a limited edition G-Shock Watch – ROG Masters 2017 Edition with every purchase of the ROG Zephyrus GX501. Redemption starts on 25 September and ends 31 December 2017[2]. While stocks last.