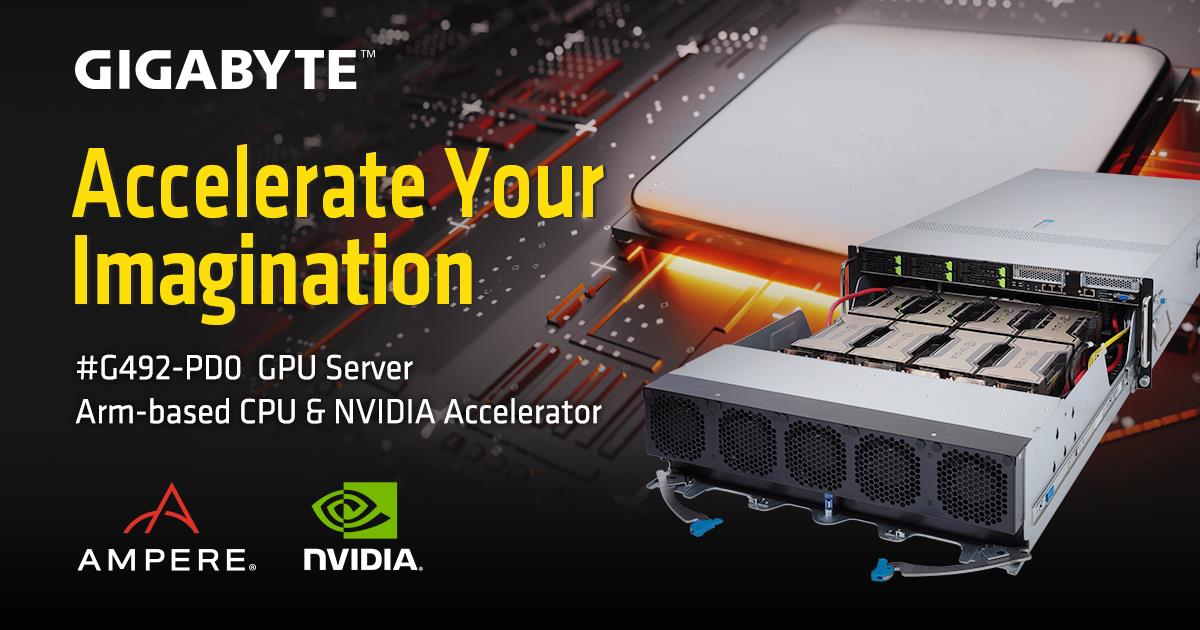 May 19, 2022 – GIGABYTE Technology, (TWSE: 2376), an industry leader in high-performance servers and workstations, today announced a new supercharged, scalable server, G492-PD0, that supports an Ampere® Altra® Max or Altra® processor with NVIDIA HGX™ A100 Tensor Core GPUs for the highest performance in cloud infrastructure, HPC, AI, and more. Leveraging Ampere’s Altra Max CPU with a high core count, up to 128 Armv8.2 cores per socket with Arm’s M1 core, the G492-PD0 delivers high performance efficiently and with minimized total cost of ownership.

GIGABYTE developed the G492-PD0 in response to a demand for high-performing platform choices beyond x86, namely the Arm-based processor from Ampere. This new G492 server was tailored to handle the performance of NVIDIA’s baseboard accelerator without compromising or throttling CPU or GPU performance. This server joins the existing line of GIGABYTE G492 servers that support the NVIDIA HGX A100 8-GPU baseboard on the AMD EPYC platform (G492-ZL2, G492-ZD2, G492-ZD0) and Intel Xeon Scalable (G492-ID0).

The G492 line of servers employs a novel cooling solution that dedicates a cooling chamber for NVIDIA accelerators and GPUs used in the networking expansion slots, ensuring the highest airflow possible to cool high performance components. On top of the 3U GPU chamber is a 1U server that houses the CPU, memory, storage, and front facing expansion slots. Due to the high efficiency of Ampere’s processors, the slim 1U server is able to sustain peak performance, including populating all Gen4 U.2 NVMe drive bays and two additional expansion slots on the front of the chassis without compromises.

The inclusion and choices of the NVIDIA HGX A100 platform in the new GIGABYTE server is important, in that new NVIDIA Magnum IO™ GPUDirect technologies favor faster throughput while offloading workloads from the CPU to achieve notable performance boosts. The HGX platform supports NVIDIA GPUDirect RDMA for direct data exchange between GPUs and third-party devices such as NICs or storage adapters. And there is support for GPUDirect Storage for a direct data path to move data from storage to GPU memory while offloading the CPU, thus resulting in higher bandwidth and lower latency. For high-speed interconnects the four NVIDIA A100 server incorporates NVIDIA NVLink®, while the eight NVIDIA A100 server uses NVSwitch™ and NVLink to enable 600GB/s GPU peer-to-peer communication.

GIGABYTE will continue to pursue the most prolific lineup of servers in the market for all enterprise workloads. Creating Arm based servers is nothing new to GIGABYTE as we have been developing solutions for almost a decade. And future platforms will be created based on market demand, including more liquid cooling solutions.