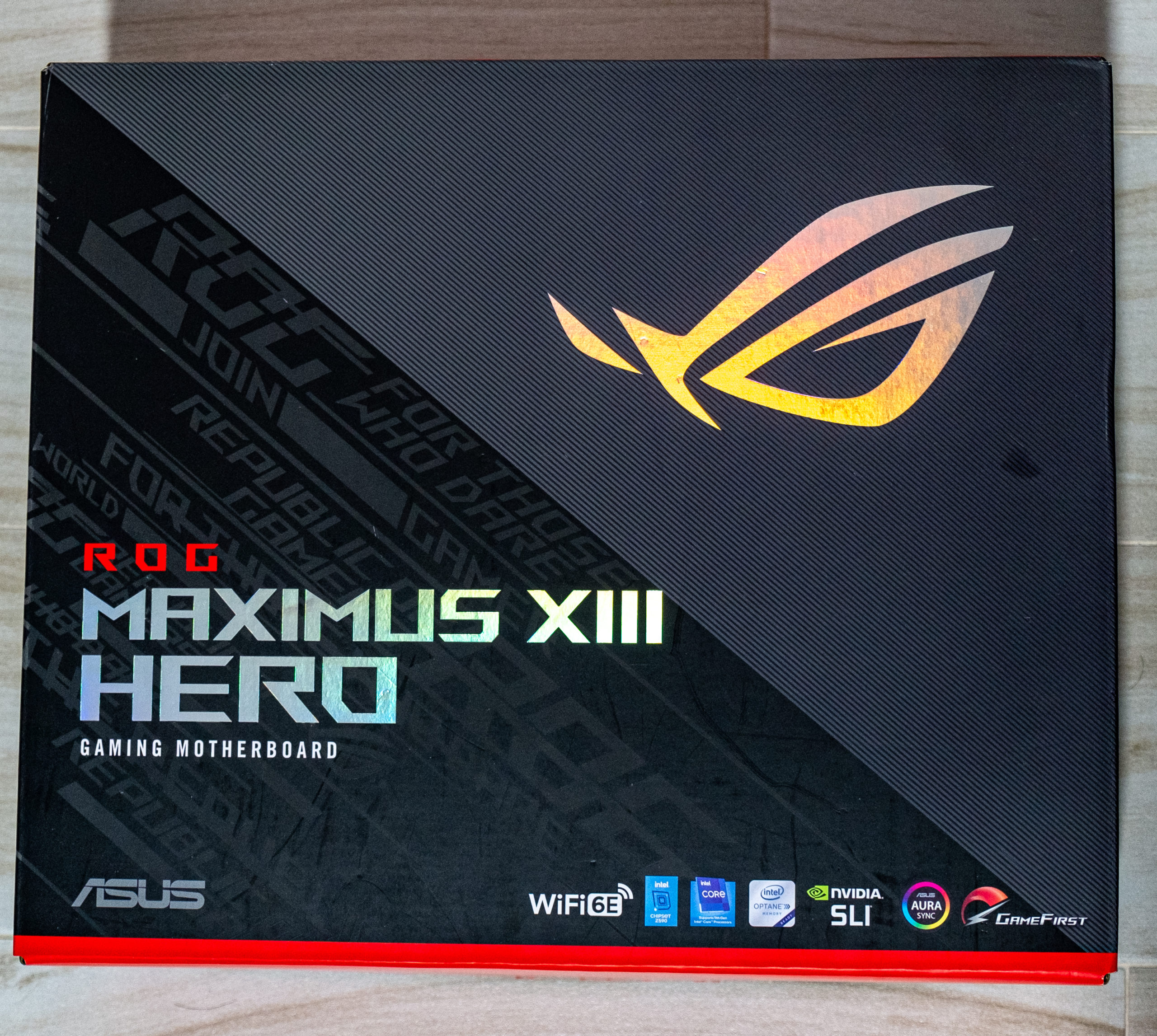 The ASUS ROG Maximus XIII HERO motherboard is an ATX sized, a socket LGA1200 and Z590 chipset. Which is primarily targeted towards enthusiasts, gamer and users looking to push the envelope on the new Intel 11th Gen Core processors, such as the Core i9-11900K and also support backward compatible 10th Gen Core i7-10700K. This model sits quite high up in the product segment and offers users dual Intel I225-V 2.5Gb LAN, four PCIe 4.0 x4 M.2, Thunderbolt 4 USB-C and a total of six SATA ports. The dual 8-pin connectors provide power to processor and for VRM design as such has 14+2 phases backed by 90A power stages.

For user still using Z490 not worth upgrade to Z590 motherboard, because ASUS provide an BIOS update, Z490 will also be compatible with 11th Gen processors and the new Z590 chipset has native support for 3200 MHz DDR4 memory, but the XMP enable can run upwards to 4866 MHz with a compatible memory kit. This board also features an Intel WiFi 6E and two Ethernet 2.5 GigE LAN ports.

The black themed motherboard can be customized LEDs wise with Aura Sync and the onboard Gen 2 addressable RGB LED headers. The heat sink optimized for cooling and armed with a proper feature set to build around 17 (14+2+1) power stages.

Below the memory sockets you’ll find the onboard bench controls including the large START button, Debug LED and a new FLEX KEY button.  By default the Flex Key is your standard reset however you can reassign its feature in the BIOS to control the AURA lighting effects or do a Safe Boot if you happen to be pushing the limit with overclocking.

At the bottom of the board is another overclocking friendly feature called the ReTry button.  This works to force the board to restart when the normal reset button isn’t working (or been reassigned).  It is a solid interrupt so try not to be scared when you press it by accident.

The ROG XIII Hero is almost fully covered with an large black cover and two large VRM coolers surrounding the CPU socket. Below that you’ll find the heatsink cover for the Z590 Chipset along with three removable heatsinks for M.2 drives.

The HERO boards are based upon 16 power phases (14+2), there are 14 phases at 90A are reserved for the CPU and 2x90A for the Mosfet SoCs. The power stages are all cooled by aluminum heat sinks.

The Z590 chipset comes with 24 PCI Express 3.0 lanes and unlike the lanes coming from the processor the chipset PCIe are intended for connectivity and storage.  You will find a total of three M.2 slots on this motherboard all with different key types for different devices.  All three slots feature integrated heatspreaders and be warned, lots of disassembly is required.

In turn, the Z590 chipset supports a total of 30 I / O lines, which can be distributed as follows:

It is clear that if the Z590 has only 30 ports, then all of the above ports must fit into this limit, so the usual shortage of PCIe lines will take place in this case as well.

As you can see, this motherboard has a redistribution of PCIe lines between slots, therefore multiplexers from Diodes Inc.

To maintain stable frequencies on the PCIe bus (and for the needs of overclockers) there is an external clock generator from an unknown manufacturer, marked by Asus as ProClock II.

It’s very hard to eject the graphics card from the motherboard, due to the M.2 heatsink blocking the release lever and i need to use a minus screw driver to press down the lever.

In total, the board has 6 Serial ATA 6 Gb / s connectors + 3 slots for drives in the M.2 form factor (+2 M.2 slots via the proprietary ROG DIMM.2 slot). The 4 SATA ports are implemented via the Z590 chipset and support RAID creation.

2 SATA_5 / 6 ports share resources with the PCIe x16_3 slot. And the SATA_2 port shares resources with one of the M.2, which will be discussed below.

Each phase channel has a superferrite choke and a Texas Instruments 90A CSD59880RWJ MOSFET.

The circuit is controlled by the ISL69269 PWM controller from Renesas, designed for a maximum of 8-12 phases.

The VCCSA unit has its own separate two-phase power supply circuit.

On the bottom motherboards, you can find a proprietary digital TPU controller, which is precisely engaged in smart assemblies of the power phases for the PWM controller.

There are two high-speed Ethernet controllers: Intel I225-V, which is capable of operating at 2.5 Gbps.

There is also an integrated wireless adapter on the Intel AX-210NGW controller, through which Wi-Fi 6E (802.11a / b / g / n / ac / ax) and Bluetooth 5.2 are implemented. It is installed in the M.2 slot (E-key), and its connectors for screwing in remote antennas are located on the rear panel.