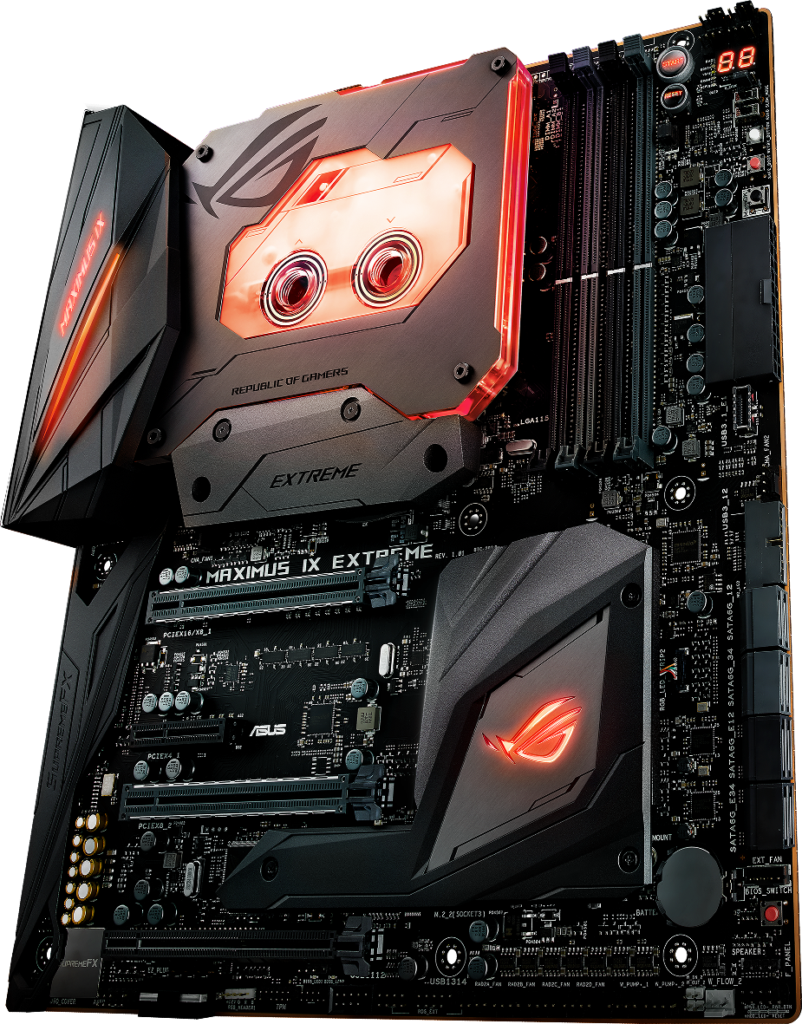 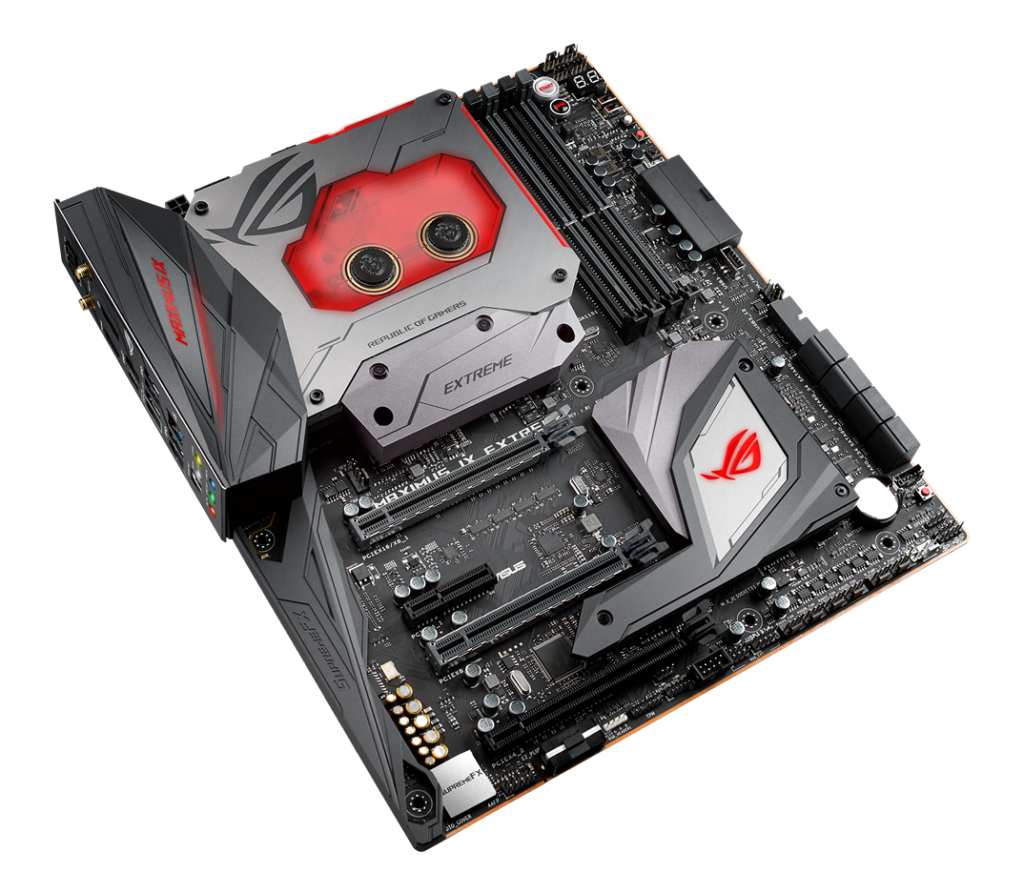 To create this all-new water-cooling solution, ROG teamed up with Bitspower. Designed from the ground up, Maximus IX Extreme’s monoblock has flow-rate, water-leak and temperature sensors all seamlessly integrated to keep wiring and tubing complexity to a minimum. 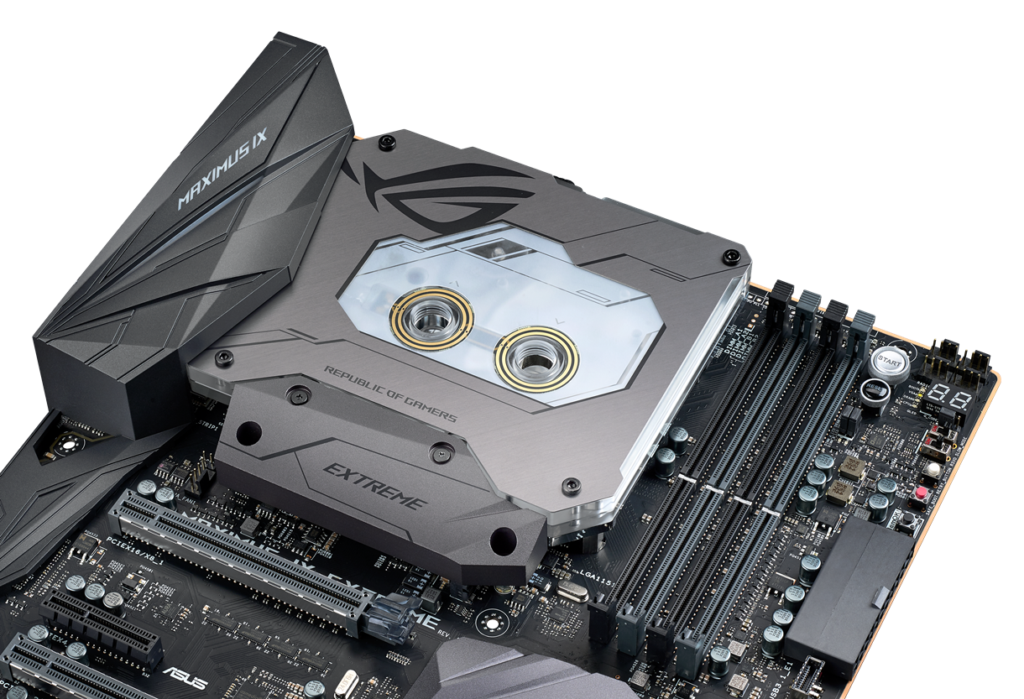 Maximus IX Extreme simplifies water-cooling with the integrated monoblock engineered to cool both the processor and voltage-regulator module (VRM). The embedded flow meter monitors the monoblock’s water-pump status in real time, while the temperature sensors monitor the temperature of both the water input and output. The ROG monoblock even has a built-in leak detector to alert the user and automatically shut the system down for added protection.

The water-cooled monoblock also makes direct contact with the integrated M.2 heatsink, for temperature reductions in the M.2 SSD area of up to 42.8°C — preventing throttling for maximum performance. 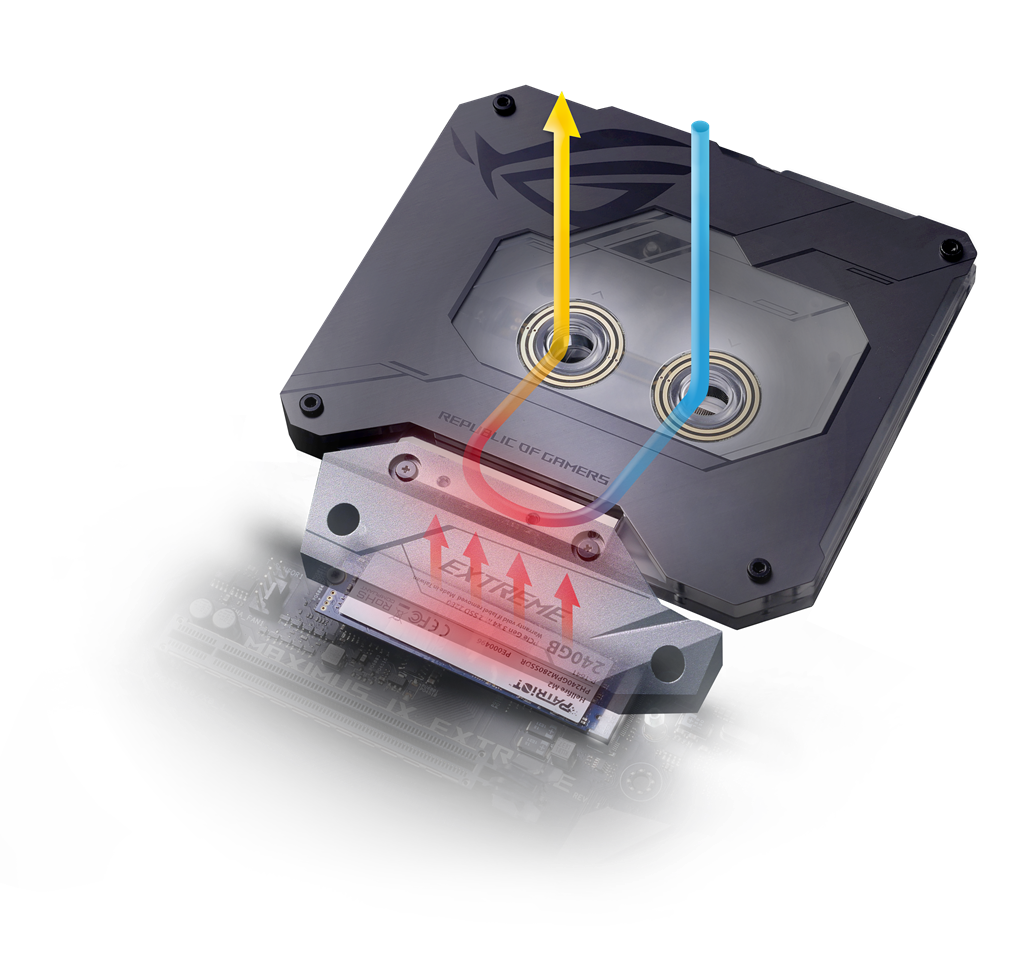 Commenting on his company’s cooperation in creating Maximus IX Extreme’s monoblock Bitspower CEO, Vincent Yu, said: “It was an awesome opportunity to work with ROG. The brand’s expertise in hardware and thermal design combined with our water-cooling experience was the perfect storm to create this revolutionary waterblock!”.

The new motherboard also has onboard fan connectors that are conveniently located for water-cooling radiators, with eight headers divided between the top and lower edges of the board. With dedicated sensors feeding information straight into ROG’s intuitive Fan Xpert 4 utility, it’s easy for users to configure the optimum RPM fan curve for each radiator.

Maximus IX Extreme lifts ROG’s revered SupremeFX audio technology to new quality levels, delivering an exceptional 113dB signal-to-noise ratio on the line-in connection for best-ever recording performance, and 120dB on the line-out for crystal-clear sound. ROG engineers have also added a low-dropout regulator for cleaner power delivery to the SupremeFX S1220 codec, an ESS® Sabre Hi-Fi ES9023P digital-to-analog (DAC) converter for superior front-panel output, and a Texas Instruments® RC 4580 op-amp for high gain with low distortion — which all adds up to audio that envelops the listener as never before. For easier identification in any lighting condition, Maximus IX Extreme even features color-coded and LED-illuminated 3.5mm audio connectors.

Sonic Radar III has also been upgraded, with an evolved audio engine that processes sounds more accurately than ever to ensure that the gamer is always aware of what’s going on around them. A new on-screen arrow has been added to help pinpoint the enemy position instantly, and there’s an all-new head-up display with an in-game three-dimensional arrow for more intuitive experiences.

Maximus IX Extreme is one of the toughest ROG motherboards to date, loaded with multiple safeguards to keep both itself and the user protected.

ROG’s patent-pending pre-mounted I/O shield offers increased protection against electrostatic discharge of 12kV and is pre-fitted to make it easier to install the motherboard. Its sleek new design means it looks as good as it performs, while Maximus IX Extreme’s copper-plated edge both improves the motherboard’s aesthetic appeal and provides enhanced protection against electromagnetic interference (EMI).

Maximus IX Extreme also offers PC DIYers the reassurance of SafeSlot and SafeDIMM. SafeSlot is the PCIe slot reinvented by ASUS and engineered to provide superior retention and shearing resistance. Manufactured in a single step, a new insert-molding process integrates the slot with fortifying metal for an inherently stronger slot, which is then firmly anchored to the motherboard through additional solder points. SafeDIMM is the exclusive DIMM slot with a metal key-pin that increases durability compared to traditional DIMM slots.

USB-C is the latest USB connector technology, and Maximus IX Extreme allows users to put it right where they need it with an onboard USB 3.1 front-panel connector. This is powered by an ASM 2142 USB 3.1 controller running at PCIe 3.0 x2 bandwidth to maximize data-transfer speeds. The motherboard also supports Thunderbolt 3, for transfers of up to 40Gbps for four times (4X) the data speeds of USB 3.1 and twice (2X) the video bandwidth.

Maximus IX Extreme is also equipped with next-level 802.11ac Wi-Fi with 2×2 dual-band 2.4/5GHz antennas for up to 867Mbps transfer speeds — and the very latest MU-MIMO technology to ensure that every connected use experiences the best wireless and online speeds.