“Today we’re seeing the convergence of our professional markets. Real-time visualization, graphics virtualization, and machine intelligence are coming together to enable extraordinary new possibilities for professionals, and no one is better positioned to win than AMD. Radeon Pro was built on the promise of enabling the art of the impossible, giving professional content creators a means to realize even their wildest ambitions. But their visions and the technology needed to achieve them is a moving target, an unending challenge that demands more from creators and the technology they use every year. With the new Radeon Pro WX 9100 and Radeon Pro SSG, we’re breaking new ground and we can’t wait to see how you unleash this power,” said Ogi Brkic, general manager, professional graphics, Radeon Technologies Group, AMD.

The Radeon Pro WX 9100 workstation graphics card is designed to excel in the most demanding media and entertainment, and design and manufacturing workloads. Delivering up to 12.3 TFLOPS of peak single precision compute performance, the Radeon Pro WX 9100 graphics card represents a new era of professional graphics capabilities fueled by powerful Next-Gen Compute Units3 with Rapid Packed Math and an Enhanced Geometry Pipeline which improves processing efficiencies. Compared to the AMD FirePro™ W9100 the Radeon Pro WX 9100 runs models more than twice as fast, delivering over 2.6X the peak throughput-per-clock.2

The Radeon Pro WX 9100 is a dramatic improvement over AMD’s previous generation graphics card, boasting 51% more memory bandwidth4, 2.6X performance/Watt5, 2.3X the compute performance6, and a wide range of API support including Vulkan® 1.0, OpenGL® 4.5, OpenCL™ 2.0, and DirectX® 12.1, and the latest display technologies including support for 8K at 60Hz, 4K at 120Hz, and DisplayPort 1.4 HDR-ready7 with support for up to six displays using AMD Eyefinity Technology. To demonstrate the computational superiority of the Radeon Pro WX 9100, AMD demonstrated real-time raytracing using Radeon ProRender paired with Unreal® Engine 4. As the scene was loaded in Unreal, the Radeon Pro WX 9100 computed the raytraced scene in parallel. 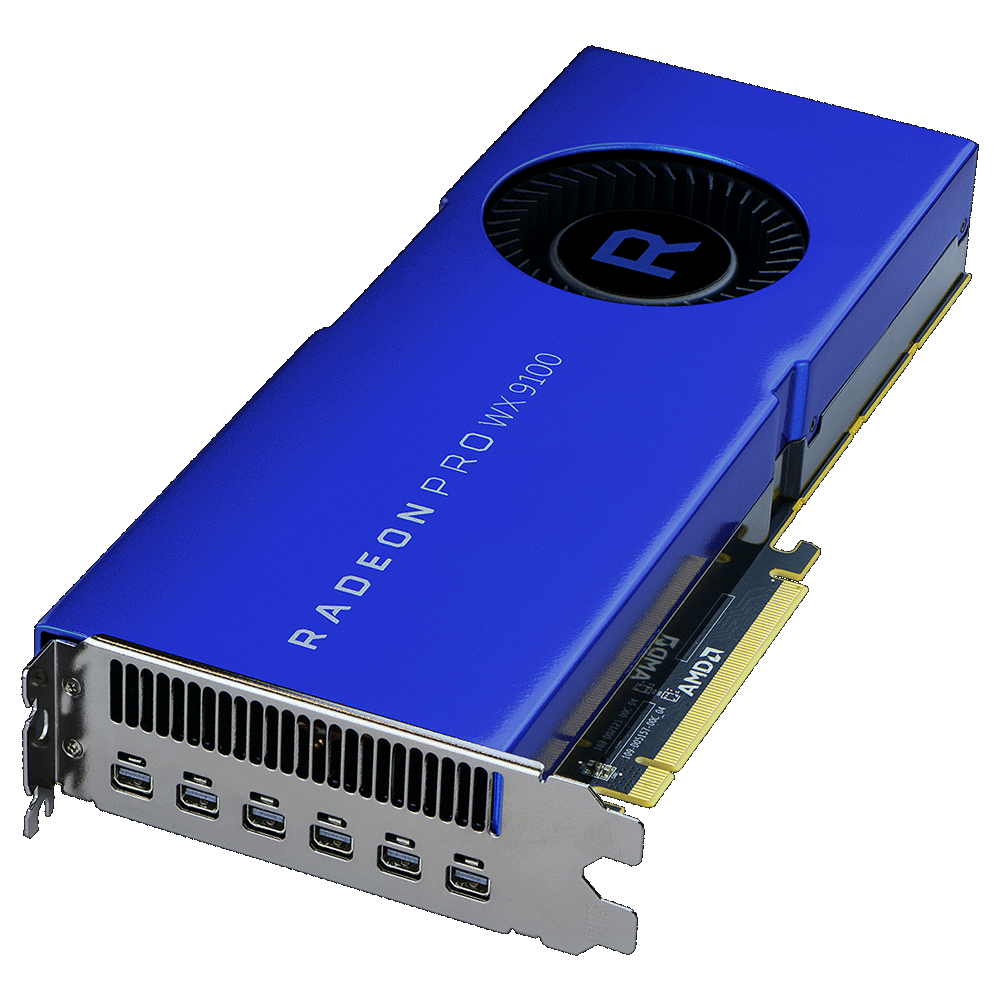 Today’s professional content creators face numerous obstacles in their workflows, and while the GPU and storage ingredients exist to address them in theory, in practice there has been no solution that brings them together. With the Radeon Pro SSG, AMD set out to solve those obstacles with a fundamental shift in the science of PC technology, with high-speed, high-capacity NVMe devices onboard the graphics card.

Featuring the same performance and features of the Radeon Pro WX 9100, the Radeon Pro SSG is the first graphics card to offer 2TB of graphics memory, enabling smooth, native 8K video editing in real-time. At Capsaicin SIGGRAPH, AMD demonstrated how the Radeon Pro SSG effortlessly scrubbed through raw 8K content in Adobe® Premiere® Pro providing near instantaneous access to any position in the video. The Radeon™ Pro SSG card empowers the editors to play back, manipulate, stitch and post-process raw 8K content as easily as today’s 4K workflows and represents a fundamental shift in hardware for those who deal with big data sets. Leading ISVs are adapting their software to make the most of this next-generation architecture.

AMD also offers a wide range of tools and open source software for professional content creators including Radeon ProRender and the Radeon™ ProRender Game Engine Importer. Radeon ProRender is a powerful physically-based rendering engine available as for many popular 3D content creation applications, including Autodesk® 3ds Max® and Maya®, Dassault Systèmes SOLIDWORSK®, and Blender™, and an upcoming integration with Cinema 4D by Maxon. Radeon ProRender works across Windows®, macOS® and Linux®, and supports AMD GPUs, CPUs and APUs as well as those of other vendors. The Radeon ProRender Game Engine Importer, currently in beta, is designed to more easily port models from visualization programs like SOLIDWORKS® to real-time engines like Unreal® Engine. With a few clicks professionals can easily export a Radeon ProRender scene in one application, and open the same scene in the real-time engine enabling advanced visualization with the power of Radeon Pro GPUs and Radeon ProRender.