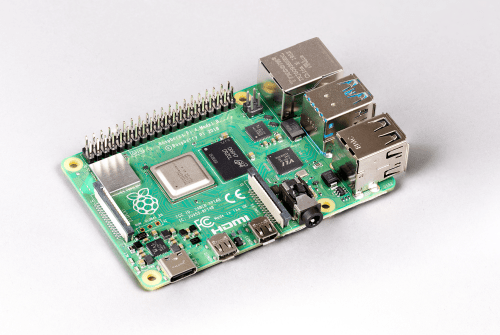 Raspberry Pi 4 is almost a year old, and it’s been a busy year. We’ve sold nearly 3 million units, shipped a couple of minor board revisions, and reduced the price of the 2GB variant from $45 to $35. On the software side, we’ve done enormous amounts of work to reduce the idle and loaded power consumption of the device, passed OpenGL ES 3.1 conformance, started work on a Vulkan driver, and shipped PXE network boot mode and a prototype of USB mass storage boot mode – all this alongside the usual round of bug fixes, feature additions, and kernel version bumps.

While we launched with 1GB, 2GB and 4GB variants, even at that point we had our eye on the possibility of an 8GB Raspberry Pi 4. We were so enthusiastic about the idea that the non-existent product made its way into both the Beginner’s Guide and the compliance leaflet.

The BCM2711 chip that we use on Raspberry Pi 4 can address up to 16GB of LPDDR4 SDRAM, so the real barrier to our offering a larger-memory variant was the lack of an 8GB LPDDR4 package. These didn’t exist (at least in a form that we could address) in 2019, but happily our partners at Micron stepped up earlier this year with a suitable part. And so, today, we’re delighted to announce the immediate availability of the 8GB Raspberry Pi 4, priced at just $75.

It’s worth reflecting for a moment on what a vast quantity of memory 8GB really is. To put it in retro-perspective (retrospective?), this is a BBC Micro‘s worth of memory for every bit in the memory of the BBC Micro; it’s a little over 13,000 times the 640KB that Bill Gates supposedly thought should be enough for anyone (sadly, it looks as though this quote is apocryphal).

If you’re a power user, intending to compile and link large pieces of software or run heavy server workloads, or you simply want to be able to have even more browser tabs open at once, this is definitely the Raspberry Pi for you.

What else has changed?

To supply the slightly higher peak currents required by the new memory package, James has shuffled the power supply components on the board, removing a switch-mode power supply from the right-hand side of the board next to the USB 2.0 sockets and adding a new switcher next to the USB-C power connnector. While this was a necessary change, it ended up costing us a three-month slip, as COVID-19 disrupted the supply of inductors from the Far East.

Other than that, this is the same Raspberry Pi 4 you’ve come to know and love.

Our default operating system image uses a 32-bit LPAE kernel and a 32-bit userland. This allows multiple processes to share all 8GB of memory, subject to the restriction that no single process can use more than 3GB. For most users this isn’t a serious restriction, particularly since every tab in Chromium gets its own process. Sticking with a 32-bit userland has the benefit that the same image will run on every board from a 2011-era alpha board to today’s shiny new 8GB product.

But power users, who want to be able to map all 8GB into the address space of a single process, need a 64-bit userland. There are plenty of options already out there, including Ubuntu and Gentoo.

Not to be left out, today we’ve released an early beta of our own 64-bit operating system image. This contains the same set of applications and the same desktop environment that you’ll find in our regular 32-bit image, but built against the Debian arm64 port.

You can find a link to the new 64-bit image, and some important caveats, in this forum post.