On Friday 12th May, organizations across the world were hit by a massive ransomware attack, named WannaCry, which exploited a (now patched) Microsoft Windows vulnerability revealed in the Shadowbrokers dump on April 14.

Kaspersky Lab researchers have continued to track the evolution of the threat over the weekend.

Evolution of the ransomware

The total number of variants in circulation on Monday 15th is still unclear – but over the weekend two notable variants emerged. Kaspersky Lab does not believe any of these variants were created by the original authors – most likely they were patched by others keen to exploit the attack for their own ends.

The first one started spreading on Sunday morning, at around 02.00 UTC/GMT and was patched to connect to a different domain. Kaspersky Lab has so far noted three victims for this variant, located in Russia and Brazil.

The second variation that appeared during the weekend appears to have been patched to remove the killswitch. This variant does not appear to be spreading, possibly due to the fact it has a bug.

Number of infections to date

Further analysis of network logs suggests the WannaCry ransomware may have started to spread on Thursday 11 May.

It is difficult to estimate the total number of infections. Our own telemetry indicates that over 45,000 users have been attacked, but this represents a fraction of the total numbers of attacks (reflecting Kaspersky Lab’s customer share.)

A more accurate picture of the world situation can be drawn from the sinkhole for the kill switch hardcoded in most versions of WannaCry: Currently the Malwaretech sinkhole, which is collecting redirections from the ‘kill switch’ code, has registered about 200,000 hits.

It should be mentioned that this number does not include infections inside corporate networks where a proxy server is required for connecting to the internet, meaning that the real number of victims might easily be larger.

The number of WannaCry attack attempts detected by Kaspersky Lab on Monday 15th May has declined six-fold compared to the same time on Friday 12th. This suggests the infection may be coming under control.

Kaspersky Lab advice to reduce the risk of infection

A detailed description of the WannaCry attack method, and Indicators of Compromise can be found in the blogpost from Friday 12th on Securelist. An update blogpost will be posted later today. 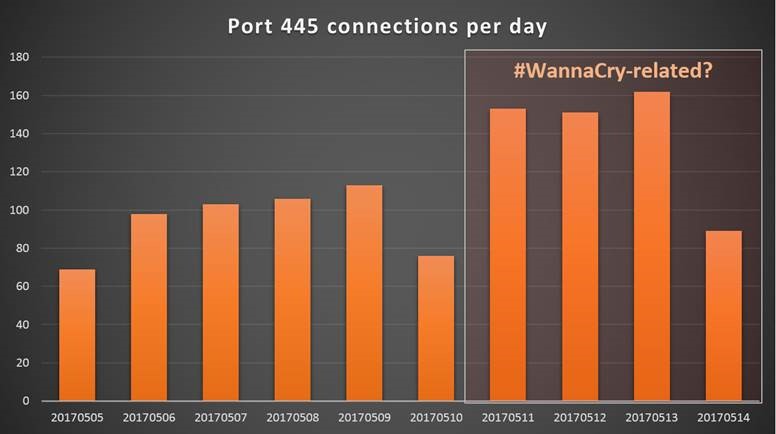 The two new variants of the WannaCry ransomware are as follows: